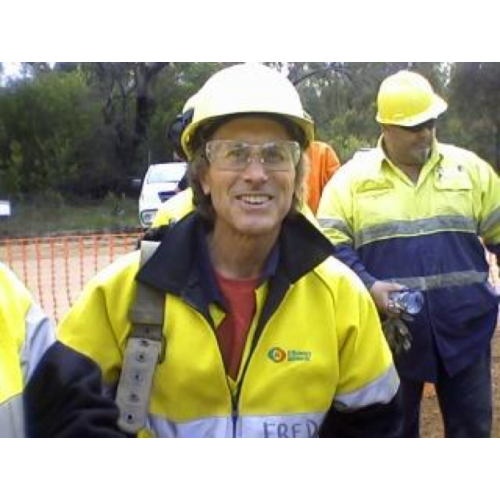 Fred Haering, originally from California, graduated with a BA and California Teacher’s Secondary School credential. Immediately following a year of teacher training, Fred was given a job working in Executive & Health Screening medical company in Sydney, Australia. There he helped launch the genesis of treadmill stress testing and developed a few medical clinics, working at times in the pathology laboratory and with medical clinic management. He was involved in a preventive medicinal programme that undertook extensive medical examinations of over 16, 000 patients, followed by remedial education with the aim of mitigating coronary risk factors. He later owned and operated 2 such clinics and consulted with various other doctors and cardiologists in the Sydney environs.

Fred moved to the medical insurance field in neighbouring New Zealand, working as an insurance representative, followed by a medical equipment sales representative stint back in California.

Changing paths again, Fred concluded German language and cultural studies in Germany while operating a Jazz music group all over Europe. This was followed by similar studies in Spanish in Spain & Switzerland.

In Alaska, Fred co-owned a horticultural business and was given a civic award for his landscaping achievements. He volunteered in an effort to secure the 1992 Winter Olympics for Anchorage, worked on the infamous Valdez Oil spill as a market research officer and undertook various research studies working alongside glacial and soil scientists as a field assistant for such bodies as NASA, the Department of Interior, The National Park Service and National Science Foundation. He is included in journal reports dealing with climate change and changing eco-systems in the Arctic and Boreal Forest region. Fred concluded an International Masters in Business Administration while in Alaska, and continued post-graduate studies for another year, mostly in business law, while also re-newing his teaching credential.

This was followed by a stint in Washington, D.C. where he spent volunteer time serving with the Sikh Independence bid (in India) as a lobbyist on Capital Hill, where he met with various senators and congress-persons. The field work beyond this, mostly in Human Rights in Panjab, India endured some 3 more years with an additional 2 years working with diaspora Sikh communities and organisations throughout the world. He was personal advisor to the leader of the political movement at ground zero in India, where he conducted hundreds of interviews with tortured victims of State-sponsored terrorism and worked tirelessly to restore the High Court judicial system in the near-anarchic state of Panjab. He has written a number of reports, briefs, corresponded with international leaders and respective parliaments and been an exhaustive guest speaker at a number of forums all over the world on the subject of genocide, independence and aboriginal identity crises facing ethnic minorties on the cusp of the 21st century. He was presented with a recognition award for his work by the Sikh Com munities of the USA.

Beyond this, now in New Zealand, he has physically constructed, co-owned and operated several Indian restaurants, returned to teach various subjects at the secondary school level. This was followed with a stint as a Maintenance Engineer for a Canadian precious metals exploration company in the Gobi Desert, Mongolia; and construction work in the Aluminium mining sector of Western Australia.

In 2010, with the advent of various severe earthquakes that struck Christchurch, where he currently resides, Fred shifted from secondary teaching to demolitions and rebuilding. In the construction and demolition sectors, Fred worked chiefly in the city centre where nearly 90%+ of buildings were substantially damaged or destroyed. As Project Manager he served as a company Health & Safety Director (and continues to consult in this area). He also was CEO of a Rope Access company and developed a Hire Equipment business. He was given a national award for his part in saving various persons during the times of the quakes, being credited with leading a team of rescuers into a collapsed building. In those years, Fred also worked with and alongside structural engineers assessing various seismically-affected buildings. Notably, Fred was component of a structural engineering team studying the affects that seismicity has had on steel structure. Significant new knowledge was brought to the fore both of capacity design and of materials affected within the field of seismic ductility.

In recent years, Fred has shifted focus more to the Health & Safety sector in undertaking the development and implementation of drug & alcohol testing programmes.

Fred is well-travelled and therefore conversant with cross-cultural issues of today, having lived in over 10 nations. He remains acutely passionate about “social justice” with a keen interest in political-economy.